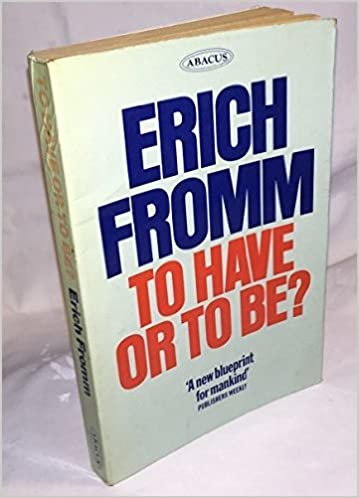 ‘Because we have freed ourselves of the older overt forms of authority, we do not see that we have become the prey of a new kind of authority. We have become automatons who live under the illusion of being self-willing individuals.

The German-born humanistic philosopher and social psychologist Erich Fromm spent most of his working life trying to understand the human condition – and its predicament. He came to the conclusion that only a fundamental change in our character, in the way we do things, will save us from a psychological and economic disaster.

Fromm recognized that the more a person has, the less they are attracted to making active and constructive efforts. He saw a clear relation between the ‘having’ of possessions – the contentment of the accumulation of goods – and inner laziness. And it was this inner laziness that would ultimately form a vicious circle, reinforcing the need to stay in the ‘having’ mode. He stated that,

…modern man has many things and uses many things, but he is very little. His feelings and thinking processes are atrophied like unused muscles. He is afraid of any crucial social change because any disturbance in the social balance to him spells chaos or death – if not physical death, the death of his identity.

The modern person, suggested Fromm, is afraid to lose their sense of identity. Any form of drastic social change spells a break-up of many incumbent social norms upon which their social persona – i.e., identity – is constructed. What many people have yet failed to grasp is that the social persona, their much-beloved character, is a social construct formed out of a sophisticated and complex array of cultural conditioning and programming. What the average person fears to lose is the artificial ‘sense of self’ which has been grafted onto them through years of socialization. It is thus a false fear – yet a fear all the same.

The personal fear of social isolation and uncertainty is thus eliminated by seeking an outside power to give their power and dependency to. Eventually, a person becomes an instrument in the hands of structures, institutions, and forms of power external to them. The only other alternative is to seek a form of self-independence based on personal trust and belief. Yet such self-beliefs are constantly undermined by authoritative institutions in the modern world. As Fromm says – ‘the structure of modern society affects man in two ways simultaneously: he becomes more independent, self-reliant, and critical, and he becomes more isolated, alone, and afraid.

The majority of people have not fully reconciled themselves to be at peace with a state of being. This is becoming more evident now as people are forced to experience ‘self-isolation’ and to stay indoors as precautions against the 2020 pandemic. This is causing great personal unrest and psychological discomfort as so many people have been conditioned to a life of exterior distraction and attention.

‘Because we have freed ourselves of the older overt forms of authority, we do not see that we have become the prey of a new kind of authority. We have become automatons who live under the illusion of being self-willing individuals. The outer chains have simply been put inside of man. The desires and thoughts that the suggestion-apparatus of society fills him with, chain him more thoroughly than outer chains. This is so because man can at least be aware of outer chains but be unaware of inner chains, carrying them with the illusion that he is free. He can try to overthrow the outer chains, but how can he rid himself of chains of whose existence he is unaware?

The growth of a humanistic society that places value on the agency of human beings requires the dramatic shift from a possession-centric lifestyle to a lifestyle where the value of individual and collective well-being is central. That is, a shift from the values of selfishness and egotism to those of compassion, collaboration, connection, and conscious communication. And yet we must admit that until now mostly ‘merchants of salvation’ have profited from satisfying the demands of people for sensations of well-being. The danger here is that the superficial satiations of well-being only serve to strengthen the inner chains within us.

What qualities would the new human posses?

These are high ideals indeed, yet not beyond the capacity of the human being.

Through human will, we can exercise our concentration, focus, and directed intention. We can provide our activities with conscious attention and give force to our actions. This in turn helps us to be centered, grounded, and balanced.

However, a person cannot be a force for change in their lives if they remain chained to the conditioned perceptions that propagate the mainstream consensus narrative. First, we are required to cleanse our lens of personal perception.