What does science say about race? Traditional notions about distinct racial differences have little scientific foundation. In short, racism is not just morally wrong; it has no basis in fact.

Ethnicity is state of belonging to a social group that has a common national or cultural tradition.[1] This is, by definition, a fluid concept; ethnic groups can be broadly or narrowly construed. For example, they can be as broad as “Native American” or as narrow as “Cherokee“. Another example is the Indian subcontinent — Indians may be considered one ethnic group but there are actually dozens of cultural traditions and subgroups like Gujarati, Punjabi, Bengali, and Tamil that are also bona fide ethnic groups. Yet another example is people in Great Britain — they may be considered British, or more precisely English, Scottish or Welsh.

A race is a group of people with a common physical feature or features. While there are hundreds — if not thousands — of ethnicities, the number of races is far fewer.

Difference Between Race and Ethnicity

Take the Caucasian (a.k.a., Caucasoid) race. The physical characteristics of Caucasians were described by M. A. MacConaill, an Irish anatomy professor, as including “light skin and eyes, narrow noses, and thin lips. Their hair is usually straight or wavy.” Caucasians are said to have the lowest degree of projection in their alveolar bones that contain the teeth, a notable size prominence of the cranium and forehead region, and a projection of the midfacial region. A person whose appearance matches these characteristics is said to be a Caucasian.

It is worth noting that “race” and “ethnicity” can be highly subjective, with lines between the two concepts frequently blurred. The video below discusses how terms for racial and ethnic identities have changed over the years and how a racial or ethnic term may not accurately describe a person’s identity, as the person may have multiple racial and ethnic backgrounds.

In most cases, race is unitary — i.e., a person belongs to one race — but may claim ethnic membership in multiple groups. For example, Barack Obama is racially black in spite of his mother being caucasian. On the other hand, a person can self-identify ethnically as Scottish and German if she has indeed lived in both ethic groups. 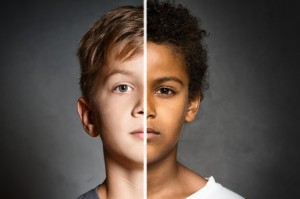 Another difference between race and ethnicity is related to the ability to self-identify. A person does not choose her race; it is assigned by society based upon her physical features. However, ethnicity is self-identified. An individual can learn a language, social norms and customs, and assimilate into a culture to belong to an ethnic group.

“Race relations” is one of the dominant themes in American politics from time to time, and refers to relationships between the major race groups — white, black, native American, Hispanic/Latino, “Asian,” and others of mixed races.

America has also had a sometimes troubled history with ethnic strife — e.g., during the waves of Irish and Italian immigration to the U.S. These immigrants were Caucasian but had a different ethnicity compared to the Anglo Saxons who preceded them; they often faced ethnic discrimination.

The word “Asian” used in a racial context in the United States refers to people of Southeast Asian origin, including a vast variety of ethnic backgrounds, such as Chinese, Japanese, Korean and Vietnamese.

This colloquial usage is incorrect because “Asian” is not technically a race, as it means someone from Asia, including people from India, Saudi Arabia, Israel and parts of Russia.

Geneticist Luca Cavalli-Sforza has argued that neither ethnicity nor race have a genetic basis and cannot be scientifically defined. He notes that human populations have a great degree of genetic unity (even in their apparent diversity):

Most genetic differences are between individuals, not groups. Almost never does one group (racial or ethnic) have a trait that is missing in the rest of humanity. Our physical differences—skin color, facial features, hair texture— actually represent ancestral adaptations to different environments. These are malleable characteristics that evolve relatively swiftly. The obvious differences in skin color, for instance, relate to the intensity of sunlight at different latitudes.